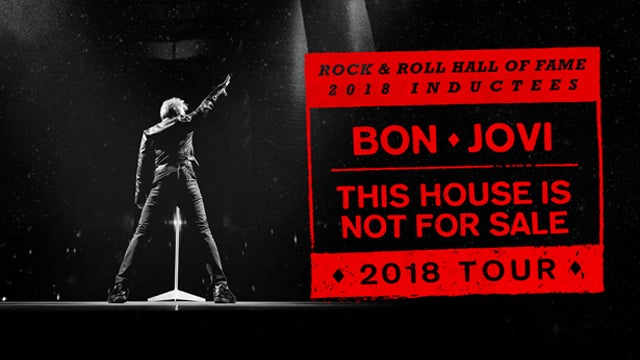 Global rock icons and newly announced Rock & Roll Hall of Fame 2018 inductees Bon Jovi have announced the spring leg of their “This House Is Not for Sale” Tour, presented by Live Nation. The Grammy-winning band will celebrate their return to the road with the re-release of “This House Is Not For Sale” as a new version, containing two brand new songs, “When We Were US” and “Walls,” available via all download and streaming partners on February 23.

The “This House Is Not For Sale” Tour has already received fan and critical acclaim, with its first North American leg grossing an estimated $47 million and its South American leg grossing nearly $40 million. Atlanta Journal-Constitution raved, “(The tour) solidifies their standing as one of rock’s most resilient acts.” Creative Loafing Tampa said, “Bon Jovi leaves 18,000 screaming, standing fans shot through the heart…” while the Los Angeles Daily News reported that “JBJ shook the stage from the start to end with energy and enthusiasm, and he kept that energy rolling with a voice in tip top shape…” The St. Louis Post-Dispatch said “Bon Jovi doesn't miss a beat..." and the Toronto Sun enthused, “It was anthemic Bon Jovi at its best...”

Bon Jovi released “This House Is Not for Sale” (Island Records) on Nov. 4, 2016 which debuted atop the Billboard 200 chart, giving the rock band its sixth U.S. No. 1. Worldwide, the album hit No. 1 in Australia and Austria; No. 2 in Spain and Switzerland; No. 3 in Canada and Germany; and hit the top 10 in Belgium, the Netherlands, Ireland, Italy, Portugal, Scotland and the United Kingdom. “This House Is Not for Sale” was Bon Jovi’s first major release since “What About Now” (2013), the band’s third consecutive multi-platinum album to debut at No. 1 on the Billboard Top 200 (“Lost Highway” in 2007, and “The Circle” in 2009).

We've missed celebrating at home with thousands of incredible Canes fans, but, we're thrilled to cheer on this team from afar as they advance to the Stanley Cup Playoffs! #LetsGoCanes
The @lukecombs concert on Sept. 18 has rescheduled to Friday, Sept. 10, 2021 and the Sept. 19 concert has rescheduled to Saturday, Sept. 11, 2021. Tickets will be honored for the new date. Can’t make it? Request a refund. Ticketmaster will email ticket holders directly. Info: livenation.com/refund
Happy Fourth. Be kind to your fellow Americans and enjoy the holiday. 🎇
10/10 way to spend a Thursday.
Throwback to January 25 when @razorblaydes265 defeated @juniorcigano in the #UFCRaleigh main event! 👊 Catch Blaydes back in @ufc action tonight on @espn! 📸: Karl DeBlaker
The @dudeperfect event postponed from June 6, 2020 has been rescheduled to June 11, 2021. All tickets will be honored for the new date. See you next summer!
The Harry Styles concert originally scheduled for Aug. 1, 2020 has been rescheduled to Oct. 12, 2021. Worth the wait.
We stand together. #BlackOutTuesday
Visit @thebloodconnection Community Blood Drive this Thursday, 10AM-6PM outside of the box office. Limited appointments remain, but walk-ups are also accepted. All donations include COVID-19 antibody testing! ❤️
Great news! @michaelbuble's "An Evening With Michael Bublé" has been rescheduled to March 23, 2021. All tickets for the previously scheduled date will be honored. Such a great show to look forward to! ❤️
Everything we wanted. Thank you, @billieeilish 💚
Thank you for an amazing night, @zacbrownband!
JUST ANNOUNCED: Comedian @joerogan will bring his #SacredClownTour to #Raleigh on June 26! Tickets on sale this Friday at 10 AM.
🚨2ND DATE ADDED🚨 @LukeCombs is bringing his #WhatYouSeeIsWhatYouGet Tour In The Round with special guests @AshleyMcbryde & @DrewParkerPlays to #Raleigh Friday 9/18 & Saturday 9/19! Tickets on sale Friday 2/28 at Ticketmaster.com.
Our latest Experience is here! Want to catch @zacbrownband in #Raleigh? Enter for your chance to win two tickets, VIP Parking & a $50 gift card! Enter using the link in our bio 😎
JUST ANNOUNCED: @LukeCombs is bringing his #WhatYouSeeIsWhatYouGet Tour to #Raleigh on September 19 with special guests @AshleyMcBryde @ @DrewParkerPlays! Tickets on sale February 28 at 10 AM.
Game on! 2/20/21
Welcome (back!) @martinlawrence. We look forward to another hilarious night with you, Michael Blackson, Lil Duval, Bruce Bruce and Benji Brown for the #LitAFTour in #Raleigh.
We are so excited to spend our evening with @CelineDion✨ #CourageWorldTour #Raleigh
JUST ANNOUNCED: #RageAgainstTheMachine will bring their tour to #Raleigh on August 2 with special guests @runthejewels! Tickets on sale this Thursday at 11 AM.
Tuesday night, @celinedion takes the stage in #Raleigh! 💕 Win tickets with our latest Experience! ✨ Hit the entry link in bio!