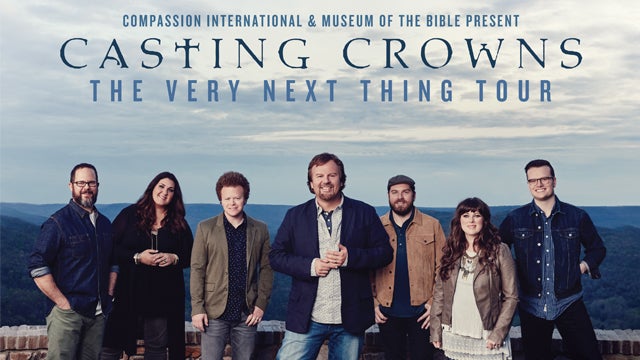 with Danny Gokey and Unspoken

with Danny Gokey and Unspoken

Multi-platinum selling and GRAMMY® winning group Casting Crowns will hit the road again this spring for the second leg of "The Very Next Thing" Tour, featuring K-LOVE Radio’s Male Artist of the Year Danny Gokey and special guests Unspoken. Presented by Compassion International and Museum of the Bible, “The Very Next Thing” Tour supports Casting Crowns’ newest studio album, The Very Next Thing, (Beach Street/Reunion). This marks the group's 15th release and eighth studio album since the label debut release in 2003. With more than 10 million records sold, Casting Crowns has held the position of Billboard’s top-selling act in Christian music since 2007.

Casting Crowns began in, serves in and continues to be rooted in the local church. It is at the local level that they are walking along with people in ministry and where the inspiration for albums are formed.

“Because we have the honor of walking with people in our churches, we get to see what people are going through – the issues that are impacting everyone now,” shares front man Mark Hall. “It is in these situations that ideas are born for what we all need to hear right here right now.

Hall shares the inspiration behind the new album and title. “We are all in different stages of ‘next.’ There’s a next step from where you are right now. We all feel like there’s a stage that we have to reach to move on to what is next – but God has you right here right now for your ‘next,' and all of these songs touch on that idea.”

Casting Crowns continues to impact audiences with their powerful lyrics and live show as they have performed for more than six million fans. In addition, more than 85,000 child sponsorships have resulted through Casting Crowns’ live shows.

For more information on “The Very Next Thing” Tour, visit CastingCrowns.com.

@itsjojosiwa's D.R.E.A.M THE TOUR will be here before you know it! 🎀 Grab your tickets now & bring the whole family to our show on March 1!✨
We love aesthetically pleasing photos *almost* as much as we love #Canes hockey in October. Happy Opening Night!
PSA for @harrystyles fans! Shop early for tour merch on Monday from 3-7PM! 🛍️ Head to the South Plaza; please wear a mask while shopping. Visit PNCArena.com to get allll the details about show day! See you soon for #HSLOTRaleigh!
We're honored to host country music legends @thealabamaband & @therealtracylawrence tonight in #Raleigh! 🏞️🎶
Wonder: The World Tour tickets are on sale now! Who’s ready to see @shawnmendes in #Raleigh on June 23? 😍 Visit Ticketmaster.com and get yours!
Our friends at @disneyonice bring the magic to #Raleigh December 8-12! ✨⛸️ See your favorite characters live on ice in "Disney On Ice presents Mickey's Search Party! Tickets on sale Oct.12 at 10AM at Ticketmaster.com.
JUST ANNOUNCED: The party continues! @nkotb #MixtapeTour 2022 is coming to #Raleigh on July 22 with special guests @envoguemusic @officialrickastley & @saltnpepaofficial Tickets on sale Friday, October 8 at 11AM. Ticketmaster.com
Ready to go to Paradise City in #Raleigh tonight. @gunsnroses is BACK!! 🎸🤘🌹
Stoked to host @dudeperfect today! Welcome to #Raleigh, y'all! #DudePerfectTour 🐼
JUST ANNOUNCED: @shawnmendes is bringing Wonder: The World Tour to Raleigh on July 23, 2022! Tickets on sale Thursday, October 7 at 10AM. Full dates & ticket info at WonderTheTour.com.
TONIGHT, for the first time in decade, @wwe Monday Night Raw returns to #Raleigh! See Roman Reigns, The New Day, and more. Tickets available online or at the box office. 💪 #wwe #wweraleigh #wweraw
JUST ANNOUNCED: @transsiberianorchestra brings the 25th anniversary of "Christmas Eve & Other Stories" to #Raleigh on Dec. 15! 🎄🎸 On sale Fri. at 10AM
JUST ANNOUNCED: @imaginedragons is bringing the #MercuryTour to #Raleigh on February 10, 2022. Tickets are on sale Friday 10AM!
Stream @itsjojosiwa's new movie, The J Team, with your family now on Paramount+! Bring YOUR J Team to her concert in #Raleigh on March 1! 💖
Join our team & be a part of live event magic! ✨ We're hiring over 500 part-time Event Staff members! Visit PNCArena.com/Employment to apply, or stop by our Hiring Event on August 12, 3-6pm, to learn more and interview on site.
JUST ANNOUNCED: @wwe RAW returns to Raleigh on Monday, Sept. 20! Tickets to see your favorite Superstars are on sale Friday, July 16 at 10AM at Ticketmaster.com #WWERaw
@genesis_band is coming to Raleigh for the first time EVER on November 19! What concert would you like to see for the first time at PNC Arena? ⬇️ Photo: Will Ireland