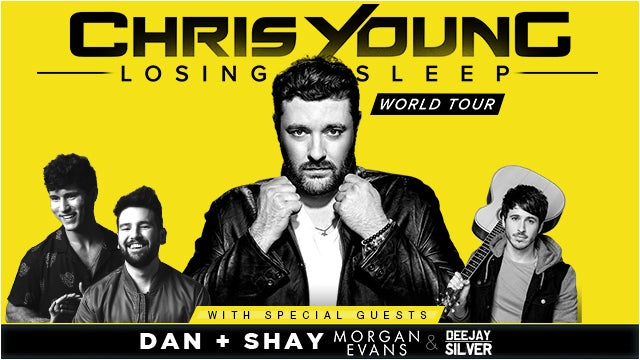 Following his induction into the Grand Ole Opry and the release of “Losing Sleep,” his second consecutive studio album to debut at No. 1 on Billboard’s Top Country Albums Chart, 2017 was undoubtedly a career-defining year for Chris Young. After scoring his 10th No. 1 single, 2018 is proving to be another banner year as the ACM Male Vocalist nominee is headlining the “Chris Young Losing Sleep 2018 World Tour.” Dan + Shay, Morgan Evans and Dee Jay Silver will join the multi-platinum entertainer as special guests.

Named “one of his era’s finest traditionalists” by the Associated Press, Chris Young has quickly become an international ambassador for country music, performing to capacity crowds around the world. His hit-packed set highlights ten chart-toppers, including back-to-back No. 1s “Losing Sleep,” “Sober Saturday Night,” “Think Of You,” and “I’m Comin’ Over.” Chris is hailed “a true country singer” (Lincoln Journal Star) who has “handily made the leap to headliner status” (Green Bay Press Gazette) and puts on a “riveting performance” (La Crosse Tribune).