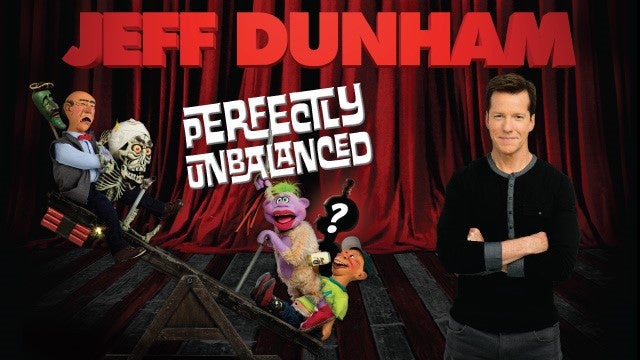 International comedy sensation Comic/Ventriloquist Jeff Dunham, has performed in front of sold out audiences worldwide showcasing the undeniable power of induced laughter.  Dunham along with his cast of hilarious characters are set to embark on the second leg of their hugely successful “Perfectly Unbalanced” Tour. The show is packed with new surprises and old favorites.

Over the past 46 years Dunham and his world famous characters; Walter, Achmed, Bubba J, Peanut and Jose Jalapeno have garnered numerous accolades; from being named Forbes' Celebrity 100 list of Most Powerful Entertainers, as well as setting the Guinness World Records for the “Most Tickets Sold for a Stand-Up Comedy Tour,” to setting the record for viewership on Comedy Central. He has sold more than 7 million DVDs worldwide and has nearly a billion views on YouTube.

Dunham hand-crafts each character personally from conception to the final coat of paint then brings them to life on stage. His beloved troupe of sidekicks are: Walter the Grumpy Retiree, Ached the Dead Terrorist, the beer-fueled redneck Bubba J, the manic purple creature Peanut, the spicy pepper from south of the border Jose Jalapeno and Little Jeff, a mini-version of the ringmaster himself.

Dunham has carved a unique corner in the comedy world that’s as funny as it is popular. The New York Times Magazine declared Jeff Dunham “the most successful comedian working in America.”  He has been named Pollstar’s #1 Comedy Tour in North America for three years running as well as their Top Worldwide Tour for two years in a row.