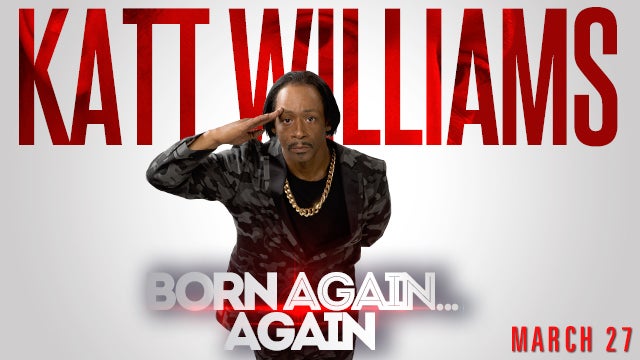 Known just as much for his permed hair as he is for his animated performances and quick wit, comedian Katt Williams has been making his mark in Hollywood for over 12 years.  Beginning his career at an age when most teenagers are seeking their driver’s license, Katt Williams quickly discovered that he had a gift for making people laugh. In 1999, Williams became a presence popular comedy clubs such as The Improv, The Comedy Club, The Icehouse and he had his own room at The Hollywood Park Casino where he had a large, loyal following. He became somewhat of a staple comedic force on the BET Network, appearing on shows such as “Comic View,” “Rip the Runway,” “Black Carpet,” “Rap City,” “106 & Park,” “The BET Awards” and even hosting the 1st ever “BET Hip Hop Awards” in 2006.

Katt Williams’ talent extends over multiple mediums. Williams is known to most for his breakout role in three seasons of Nick Cannon’s highly-rated MTV improv show, “Wild n’ Out” and his acting roles in Ice Cube’s “Friday After Next” and “First Sunday.” Throughout his career he has been massively embraced by the hip hop community, appearing in music videos for everyone from Outkast “Roses” and Ludacris “Stand Up” & “Number One Spot” to E-40 “One Night Stand” and Lil’ Kim “Shut Up/Lighter’s Up.”  Williams’ ability to make people laugh is best demonstrated on the stage as a stand-up comic. His hour long specials include “The Pimp Chronicles Part 1” (2005), “American Hustle” (2007), “It’s Pimpin’ Pimpin’” (2008), and his Showtime special “Kattpacalypse” (2012), Nick Cannon’s “School Dance” (2014) and his most recent HBO special directed by Spike Lee - “Priceless: Afterlife” (2014).

Happy Halloween 🎃 enjoy lots of treats, without the tricks! 👻
HBD to us! Today marks our 21st birthday, and our only wish is to celebrate with you soon! We opened our doors on October 29, 1999, as the @canes hosted the New Jersey Devils, and it's been a wild ride ever since. Cheers to 21 years of great memories with all of you! 🥂🎂🎉
We’re proud to be part of the #NCLive Coalition, along with many entertainment venues across North Carolina. Together, we’re working to bring live entertainment back to our state. NCLiveCoalition.com
Protect yourself this flu season! This Saturday from 9AM to 3PM, @harristeeter will host a Drive-Thru Flu Shot Clinic at PNC Arena. Harris Teeter pharmacists will adminster flu shots on site, with various safety precautions. Appointments are required and can be made online. Visit our website for details.
There is a critical need for blood donations in the Triangle and surrounding communities. You can help! Make an appointment for this Friday's drive with @thebloodconnection! Visit our website to sign up!
We've missed celebrating at home with thousands of incredible Canes fans, but, we're thrilled to cheer on this team from afar as they advance to the Stanley Cup Playoffs! #LetsGoCanes
The @lukecombs concert on Sept. 18 has rescheduled to Friday, Sept. 10, 2021 and the Sept. 19 concert has rescheduled to Saturday, Sept. 11, 2021. Tickets will be honored for the new date. Can’t make it? Request a refund. Ticketmaster will email ticket holders directly. Info: livenation.com/refund
Happy Fourth. Be kind to your fellow Americans and enjoy the holiday. 🎇
10/10 way to spend a Thursday.
Throwback to January 25 when @razorblaydes265 defeated @juniorcigano in the #UFCRaleigh main event! 👊 Catch Blaydes back in @ufc action tonight on @espn! 📸: Karl DeBlaker
The @dudeperfect event postponed from June 6, 2020 has been rescheduled to June 11, 2021. All tickets will be honored for the new date. See you next summer!
The Harry Styles concert originally scheduled for Aug. 1, 2020 has been rescheduled to Oct. 12, 2021. Worth the wait.
We stand together. #BlackOutTuesday
Visit @thebloodconnection Community Blood Drive this Thursday, 10AM-6PM outside of the box office. Limited appointments remain, but walk-ups are also accepted. All donations include COVID-19 antibody testing! ❤️
Great news! @michaelbuble's "An Evening With Michael Bublé" has been rescheduled to March 23, 2021. All tickets for the previously scheduled date will be honored. Such a great show to look forward to! ❤️
Everything we wanted. Thank you, @billieeilish 💚
Thank you for an amazing night, @zacbrownband!
JUST ANNOUNCED: Comedian @joerogan will bring his #SacredClownTour to #Raleigh on June 26! Tickets on sale this Friday at 10 AM.
🚨2ND DATE ADDED🚨 @LukeCombs is bringing his #WhatYouSeeIsWhatYouGet Tour In The Round with special guests @AshleyMcbryde & @DrewParkerPlays to #Raleigh Friday 9/18 & Saturday 9/19! Tickets on sale Friday 2/28 at Ticketmaster.com.
Our latest Experience is here! Want to catch @zacbrownband in #Raleigh? Enter for your chance to win two tickets, VIP Parking & a $50 gift card! Enter using the link in our bio 😎
JUST ANNOUNCED: @LukeCombs is bringing his #WhatYouSeeIsWhatYouGet Tour to #Raleigh on September 19 with special guests @AshleyMcBryde @ @DrewParkerPlays! Tickets on sale February 28 at 10 AM.