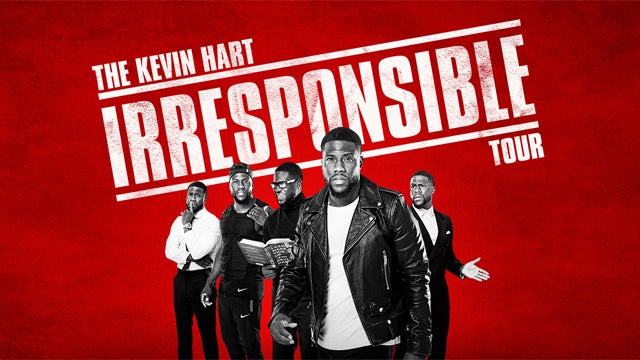 ***THERE IS A STRICT NO CELL PHONE POLICY IN PLACE FOR THIS EVENT. GUESTS WILL BE ASKED TO PUT THEIR PHONES AWAY UPON ENTERING THE ARENA. ANY GUEST USING A CELL PHONE DURING THIS EVENT WILL BE EJECTED, PER TOUR MANAGEMENT .***

Hart’s last multi-city domestic and international “WHAT NOW” comedy tour sold out large venues all over the world, including being the first comedian to sell out an NFL stadium, selling over 50,000 tickets in one show at Lincoln Financial Field.

2017 was a banner year for Hart, his memoir “I Can’t Make This Up: Life Lessons” debuted at Number One on the New York Times Bestseller list and remained on the list for ten consecutive weeks. The book also topped records on the Audible platform, selling over 100,000 copies in the first five weeks. Earlier in the year Hart voiced a title character in “Captain Underpants: The First Epic Movie.” To close 2017, Kevin appeared in the Sony reboot of the classic film “Jumanji” alongside Dwayne Johnson and Jack Black. “Jumanji” has been Kevin’s highest grossing box office release to date, the movie has made over $800 million worldwide.

Hart’s newest business venture is his digital platform the LOL NETWORK - Laugh Out Loud, the comedy brand and multi-platform network founded by Hart in partnership global content leader Lionsgate. Hart’s next feature film is “Night School” for Universal, a film in which he co-wrote, produces and stars in - all under the Hartbeat production banner. The comedy follows a group of misfits who are forced to attend adult classes in the longshot chance they’ll pass the GED exam.

JUST ANNOUNCED: @johnmulaney is bringing his #FromScratchTour to #Raleigh on May 22. Tickets are on sale Friday at 10AM! Visit PNCArena.com for details.
Now that's what we call dinner with a view! We're so excited to announce that @shakeshack is now OPEN at PNC Arena! 🍔🌭😋 Stop by the Shack by Sec. 123 to get a delicious meal or just a snack!
We're thrilled to announce the upcoming opening of @shakeshack in PNC Arena! Known for its 100% all-natural Angus beef burgers, flat-top Vienna beef dogs, spun-fresh frozen custard & more, Shake Shack is an exciting new addition to our concession offerings. Stay tuned! 🍔🌭
JUST ANNOUNCED! @eagles coming to PNC Arena on March 2! They're playing the "Hotel California" album beginning to end, plus greatest hits set! Tickets on sale Dec. 3 at 10AM.
ON SALE NOW: @allelitewrestling on January 12! See #AEWDynamite / #AEWRampage LIVE for the first time in Raleigh! Tickets make a great holiday gift, too! Visit Ticketmaster.com for tickets.
Tonight, @genesis_band kicks off The Last Domino? North American Tour in Chicago! We look forward to hosting them THIS FRIDAY night for their first-ever #Raleigh show!
JUST ANNOUNCED: @allelitewrestling's Raleigh Debut in 2022! #AEWDynamite / #AEWRampage head to PNC Arena on January 12! Tickets on sale Friday, Nov. 19 at NOON! Starting at $29+fees, they make great holiday gifts! Details at PNCArena.com!
To celebrate @transsiberianorchestra's 25th Anniversary of 'Christmas Eve & Other Stories,' we're offering $25* tickets for 25 hours only, Nov. 4 at 9AM - Nov. 5 at 10AM! 🎄🎸 Visit Ticketmaster.com tomorrow to purchase. *Plus applicable fees. Limited time offer, while supplies last. Restrictions apply.
JUST ANNOUNCED: @winterjamtour visits Raleigh March 19, with Skillet Music, Tauren Wells, KB, Colton Dixon & more! Only $10 at the door. 👏 Jam Nation membership & details: Jamtour.com
@itsjojosiwa's D.R.E.A.M THE TOUR will be here before you know it! 🎀 Grab your tickets now & bring the whole family to our show on March 1!✨
We love aesthetically pleasing photos *almost* as much as we love #Canes hockey in October. Happy Opening Night!
PSA for @harrystyles fans! Shop early for tour merch on Monday from 3-7PM! 🛍️ Head to the South Plaza; please wear a mask while shopping. Visit PNCArena.com to get allll the details about show day! See you soon for #HSLOTRaleigh!
We're honored to host country music legends @thealabamaband & @therealtracylawrence tonight in #Raleigh! 🏞️🎶
Wonder: The World Tour tickets are on sale now! Who’s ready to see @shawnmendes in #Raleigh on June 23? 😍 Visit Ticketmaster.com and get yours!
Our friends at @disneyonice bring the magic to #Raleigh December 8-12! ✨⛸️ See your favorite characters live on ice in "Disney On Ice presents Mickey's Search Party! Tickets on sale Oct.12 at 10AM at Ticketmaster.com.
JUST ANNOUNCED: The party continues! @nkotb #MixtapeTour 2022 is coming to #Raleigh on July 22 with special guests @envoguemusic @officialrickastley & @saltnpepaofficial Tickets on sale Friday, October 8 at 11AM. Ticketmaster.com
Ready to go to Paradise City in #Raleigh tonight. @gunsnroses is BACK!! 🎸🤘🌹
Stoked to host @dudeperfect today! Welcome to #Raleigh, y'all! #DudePerfectTour 🐼
JUST ANNOUNCED: @shawnmendes is bringing Wonder: The World Tour to Raleigh on July 23, 2022! Tickets on sale Thursday, October 7 at 10AM. Full dates & ticket info at WonderTheTour.com.
TONIGHT, for the first time in decade, @wwe Monday Night Raw returns to #Raleigh! See Roman Reigns, The New Day, and more. Tickets available online or at the box office. 💪 #wwe #wweraleigh #wweraw