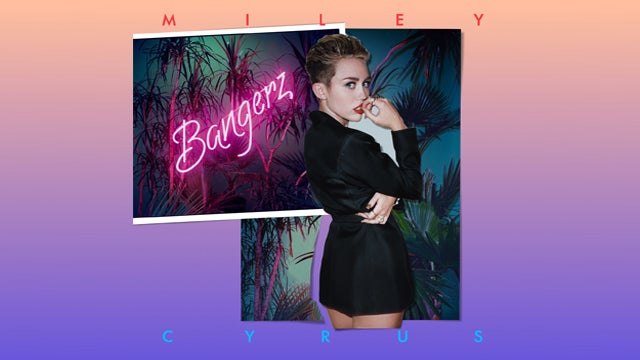 Global superstar Miley Cyrus will visit 38 cities throughout the United States and Canada on her highly anticipated BANGERZ TOUR.

Details for Miley’s BANGERZ TOUR follow her surprise appearance on “Saturday Night Live” where she announced to fans that she would be launching a tour soon. The announcement on “Saturday Night Live” comes on the heels of her well-received appearance on the show as both host and musical performer. She was part of a series of headline-making appearances that supported the release of her new album, “Bangerz,” on RCA Records. “Bangerz” debuted at #1 on both the Billboard Top 200 Album chart and the Digital Album Charts with over 270,000 albums sold.  Additionally, during release week, “Bangerz” hit #1 on iTunes in over 70 countries. Both singles, “Wrecking Ball” and “We Can’t Stop,” off “Bangerz” have already sold 4.3 million copies in the U.S. alone. “Wrecking Ball” hit #1 on the Billboard Hot 100 and stayed there for two weeks. It became Miley’s first Billboard Hot 100 #1 and her fastest-flying top 10 on Radio Songs.

“Wrecking Ball” also hit #1 on Spotify where it reached the highest streams ever for any track in the U.S. beating the next highest week by nearly 500,000 plays. This exciting news came just two days after her music video for "Wrecking Ball" became the fastest music video ever to reach CERTIFIED status, VEVO's milestone for videos delivering 100 million views in only 6 days. Cyrus shattered the previous record which she held for “We Can’t Stop,” which was CERTIFIED by VEVO just 37 days after it premiered.

“Bangerz” has been getting rave reviews including Entertainment Weekly calling it “…utterly fresh, a pop blitz from a hip-hop blueprint, and proof that Miley won't settle for just shocking us.”  US Weekly declared it “the year's most titillating pop explosion” awarding the album “4 stars (out of 4).”