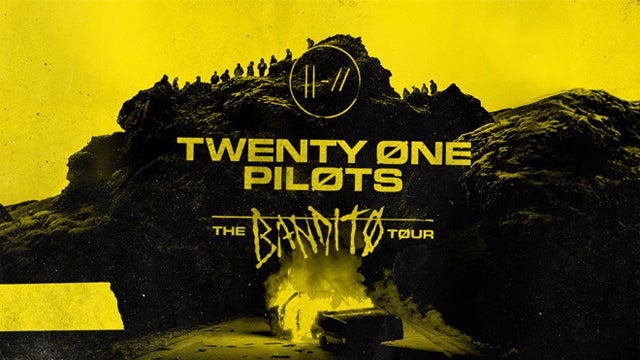 Twenty One Pilots, the GRAMMY® Award-winning duo of Tyler Joseph and Josh Dun, are gearing up for the release of their massively anticipated new album “Trench,” which arrives worldwide Friday, Oct. 5. “Trench” is available for pre-order now with
exclusive vinyl and pre-order bundles available at www.twentyonepilots.com. All pre-orders are joined by instant downloads of the album tracks “My Blood,” “Levitate,” “Nico And The Niners,” and “Jumpsuit,” each of which is also available for individual streaming or download.

To celebrate the release of “Trench,” Twenty One Pilots will begin the first leg of “The Bandito Tour,” a massive headline world tour. The tour will traverse the U.S. through the fall followed by dates in Australia, New Zealand, Europe and the UK. The U.S. leg of the epic trek is now virtually sold-out, with much of the international itinerary fast approaching that same status. Due to overwhelming demand, a second leg of the “Bandito Tour” was announced, and will see the band returning to North America for dates in Mexico, Canada, and the U.S. this spring.

Twenty One Pilots received a number of major awards and nominations over
recent years, with “Stressed Out” earning them the 2017 GRAMMY® Award for “Best Pop Duo/Group Performance” alongside four additional nods. “Blurryface” which followed Twenty One Pilots’ Fueled By Ramen debut album, 2013’s RIAA Platinum certified “Vessel” made a stunning chart debut upon its initial release, entering the SoundScan/Billboard 200 at #1. “Blurryface” spawned a series of hit singles,
beginning with the 2x RIAA platinum certified “Tear In My Heart” and followed by the #1 sensations, “Ride” and the 7x platinum certified, GRAMMY® Award-winning “Stressed Out.”

**THIS IS A MOBILE ONLY TOUR - All online, mobile, and phone sales will be restricted to mobile digital delivery only. Tickets for this tour will NOT be available for sale at any physical box office or ticket outlet.**