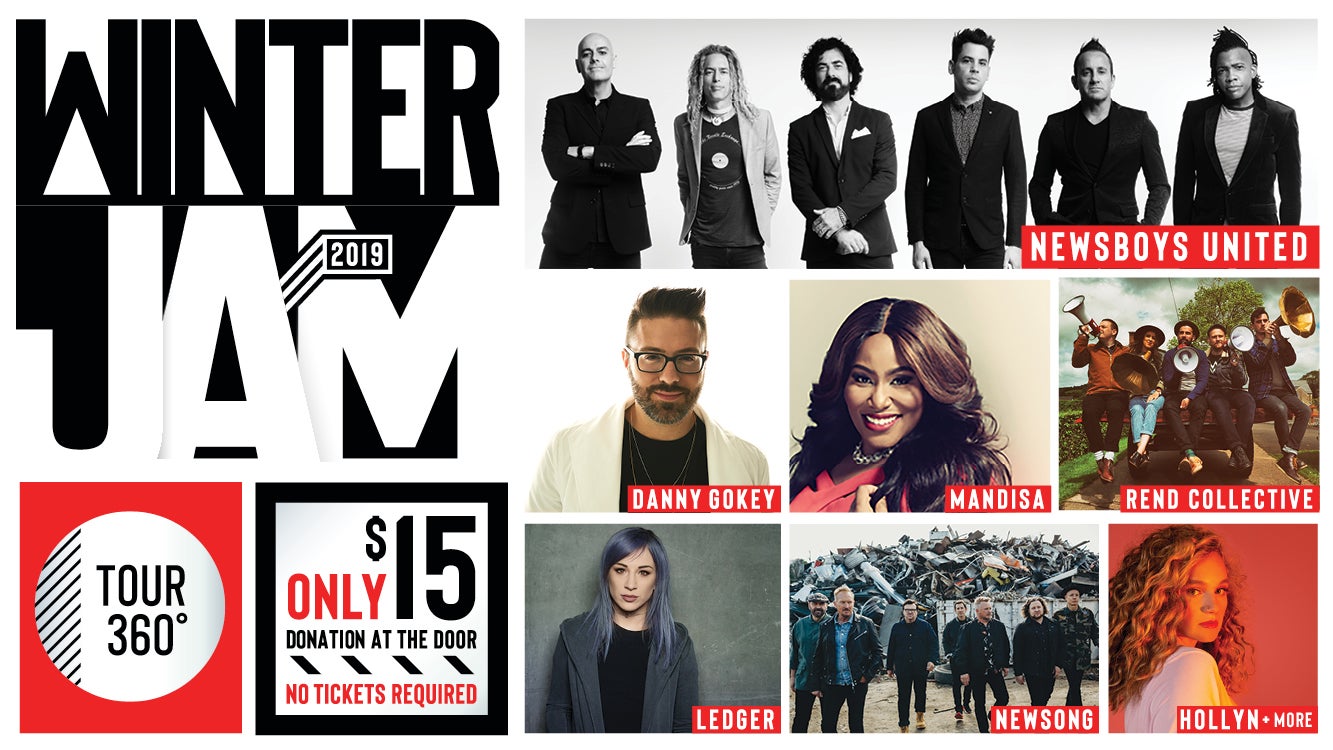 The Winter Jam Tour Spectacular, Christian music’s largest annual tour and one of the top first quarter tours in the world revealed a history-making tour first. Winter Jam will be presented on a 360º “in the round” center stage, showcasing a diverse lineup helmed by supergroup Newsboys United.

"I’ve been extremely excited to tell people about this year’s lineup,” said NewSong founding member and Winter Jam creator Eddie Carswell. “Not only are we thrilled to tour with several artists who’ve never been part of Winter Jam before, but we can't wait to be back on the road with some of our closest friends. It's going to be fun!” “We’re looking forward to having a 360º stage for the first time,” Carswell adds. “It’s something we’ve dreamed about and now it’s a reality for us and the fans. This setup will offer better views, more seating and surround sound. More than anything, I’m just ready to see how God is going to use all the artists, songs and speakers to draw people to Himself. He’s the reason we do this every year!”

JUST ANNOUNCED: @transsiberianorchestra brings the 25th anniversary of "Christmas Eve & Other Stories" to #Raleigh on Dec. 15! 🎄🎸 On sale Fri. at 10AM
JUST ANNOUNCED: @imaginedragons is bringing the #MercuryTour to #Raleigh on February 10, 2022. Tickets are on sale Friday 10AM!
Stream @itsjojosiwa's new movie, The J Team, with your family now on Paramount+! Bring YOUR J Team to her concert in #Raleigh on March 1! 💖
Join our team & be a part of live event magic! ✨ We're hiring over 500 part-time Event Staff members! Visit PNCArena.com/Employment to apply, or stop by our Hiring Event on August 12, 3-6pm, to learn more and interview on site.
JUST ANNOUNCED: @wwe RAW returns to Raleigh on Monday, Sept. 20! Tickets to see your favorite Superstars are on sale Friday, July 16 at 10AM at Ticketmaster.com #WWERaw
@genesis_band is coming to Raleigh for the first time EVER on November 19! What concert would you like to see for the first time at PNC Arena? ⬇️ Photo: Will Ireland
JUST ANNOUNCED: Comedian @kattwilliams brings his "World War III" Tour to #Raleigh on September 17. Tickets on sale this Friday at 10AM at Ticketmaster.com.
ON SALE NOW: @genesis_band The Last Domino? Tour 2021 on November 19! Join us for the first-ever Genesis show in #Raleigh! Visit Ticketmaster.com to secure your seats!
The @harlemglobetrotters bring their brand new "Spread Game" Tour to #Raleigh on Sunday, August 1! 🏀 Part streetball, part interactive family fun, it's guaranteed to be a good time! Tickets available NOW at Ticketmaster.com. Previously purchased tickets from the original date of March 15, 2020 will be honored, too!
The biggest, baddest trucks are backs! 🏁 Catch @monsterjam in #Raleigh for two weekend events, August 7-8! Tickets are on sale June 29 at 10AM, including Pit Party passes!
ON SALE NOW: @thealabamaband's 50th Anniversary Tour in Raleigh on October 7, with special guest @therealtracylawrence! Visit Ticketmaster.com for tickets to see this legendary group perform the songs you know and love! ⛰️🎶
JUST ANNOUNCED: Don't miss @genesis_band live in #Raleigh for the first time EVER this fall - Friday, November 19 at PNC Arena! Visit Genesis-Music.com to sign up for the artist presale & get early access to tickets before the general public.
JUST ANNOUNCED: @thealabamaband is bringing their 50th Anniversary Tour to Raleigh on October 7! Tickets to see the legendary country rock group are on sale this Friday at 10AM.
ON SALE NOW: @gunsnroses with special guest @mammothwvh! Don't miss it, September 29, 2021 in #Raleigh. 🤘 Get tickets at Ticketmaster.com.
Tickets are on sale NOW for CINCH @wtrodeo! Get ready for an action packed night of family fun on Saturday, Aug. 28! Tickets start at $20 & include FREE preshow activities on the dirt. 🤠
JUST ANNOUNCED: @gunsnroses is heading out on tour with special guest @mammothwvh to #Raleigh on Sept. 29, 2021! 🤘 On sale Friday at noon! Details: bit.ly/GNR_RAL
Nothing like playoff hockey in the Loudest House in the NHL. #LetsGoCanes
87,089 vaccines given at the @wakegov clinic on site! WOW! The amount of teamwork and volunteer hours put into this operation has been incredible. 👏 Thank you Wake County EMS, Fire, Emergency Management, Human Services, National Guard members, Wake County Board of Elections, Publix Libraries, Parks and Recreation, Open Space and Environmental Services and more! As well as team members from WakeMed, UNC Health, Duke Health, and the countless numbers of health professionals who administered the shots. You are ROCKSTARS! Watching you work in such an efficient manner each day as you served our community was an honor.
LET'S GOOOO @canes! CENTRAL DIVISION CHAMP VIBES. #TAKEWARNING
THIS Sunday, @therealmikeepps brings his "In Real Life" Comedy Tour to Raleigh for two shows! Very limited tickets remain for the 7:30PM show, so bring Mom to the 3PM matinee! Get tickets at Ticketmaster.com.