Presented by Compassion International, the Only Jesus Tour will support Casting Crowns’ new studio album, “Only Jesus,” releasing this Friday. Over the past few weeks leading up to the street date, the band has released six of the album’s tracks early, including the title cut and first radio single, “Only Jesus,” which is one of the fastest charting songs of 2018 and already a Top 10 smash. “Only Jesus” gives Casting Crowns their 26th Top 10 song on the Hot Christian Songs chart, the most by any group.

With more than 11 million records sold, Casting Crowns has held the position of Billboard’s top-selling act in Christian music since 2007. The band continues to impact audiences with their powerful live shows, having performed for nearly seven million fans and has crossed over a milestone of more than 100,000 child sponsorships generated through Casting Crowns’ concerts. For more information on the Only Jesus Tour, visit www.CastingCrowns.com.

ABOUT ZACH WILLIAMS
As a husband, father, singer, recording artist, songwriter and worship leader, GRAMMY® winner (Best Contemporary Christian Album, Chain Breaker) and multi-GMA Dove Awards winner (Artist of the Year and New Artist of the Year) Zach Williams continues to make history. Achieving two consecutive radio No. 1 hits for 35 weeks as a debut artist ("Chain Breaker," "Old Church Choir") Williams' music comes from a place of humility and honesty as his songs are a direct reflection of God's redemption in his life. “Chain Breaker,” his official RIAA-certified gold record-breaking single, has impacted millions of people around the world, earning Williams his first GRAMMY® nomination (Best Contemporary Christian Music Performance/Song, 2017) and a Billboard Music Award nomination (Top Christian Song). He's also won two GMA Dove Awards (New Artist; Pop/Contemporary Recorded Song of the Year, "Chain Breaker") and a K-LOVE Fan Award (for Breakout Single). Williams was also named Billboard's 2017 Top Christian Male Vocalist and New Artist of the Year. Apple Music chose him as Artist of the Week in December 2016, while "Chain Breaker" was the top track of 2016 on iTunes' Christian Songs chart and also reached No. 12 on Billboard's Hot Rock Songs chart. Williams has also been awarded by BMI with a Citation of Achievement for "Chain Breaker," recognizing the song for its national popularity and reach. For more information, please visit  www.ZachWilliamsMusic.com.

ABOUT AUSTIN FRENCH
Growing up in small town, Cordele, Ga., Austin French dreamed of sharing his faith and passion for Jesus through music at a young age. Being surrounded by a musical family inspired his passion for writing music. As he began to develop his gifts he formed bands learning to take his music to stages and churches. After becoming the worship pastor at Journey Church, in Tifton, Ga., French met his wife, Joscelyn. While serving there, French was featured on the first season of the ABC TV show “Rising Star,” where he finished as runner-up. After the show, Austin and his wife moved to Florida, and then to Nashville, Tenn., in 2017 where French began his journey into the CCM industry, signing with Fair Trade Services. After moving to Nashville, French and his wife adopted their son, and while in the process, gave birth to their second little boy. French's debut album, Wide Open is available now. For more information, visit www.austinfrenchmusic.com.

ABOUT COMPASSION INTERNATIONAL
Founded in 1952, Compassion International is a Christian child development organization that works to release children from poverty in Jesus’ name. Compassion revolutionized the fight against global poverty by working exclusively with the Church to lift children out of spiritual, economic, social and physical poverty. Compassion partners with more than 6,700 churches in 25 countries to deliver its holistic child development program to over 1.8 million babies, children and young adults. It is the only child sponsorship program to be validated through independent, empirical research. For more information, visit www.compassion.com. 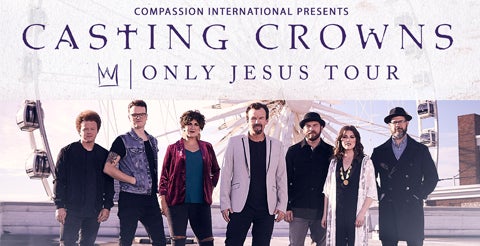