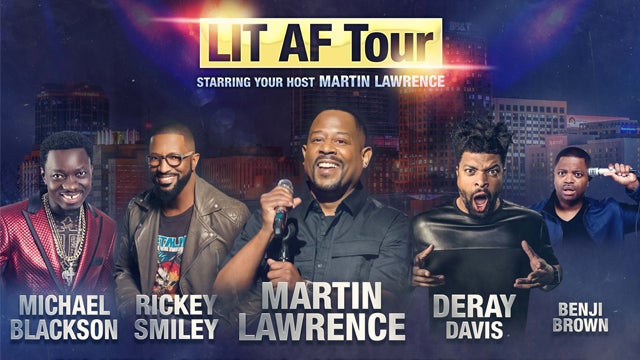 Back by popular demand, comedian, actor, director and producer Martin Lawrence has added 19 more dates to the LIT AF Tour. Lawrence stars as the high-powered host of 2018's hottest comedy event, presenting a fire lineup of comedians including DeRay Davis, Rickey Smiley, Michael Blackson, and Benji Brown. Coming off the 20th anniversary of Def Comedy Jam, where he is known for his legendary hosting, Lawrence has made a triumphant return to the stand-up stage wowing audiences with his signature style of hilarious stories, social commentary and more.

“Being on the road with this group of funny AF comedians is a blast,” says Lawrence.  “No two shows are the same and we all bring something different to the party.”

Martin Lawrence started in stand-up comedy at the legendary The Improv, where he honed his talents until he was asked by Russell Simmons to host his groundbreaking comedy series "Def Comedy Jam" on HBO. From there, Lawrence became a household name after his hugely popular self-titled TV show, "Martin," was an instant hit with TV viewers. He starred for five years as not only the title character, but other support characters like the sassy Sheneneh and Mama Payne, who became comedy classics. Lawrence would later go on to star in comedy blockbusters like "Bad Boys" 1&2, "A Thin Line Between Love and Hate," which he also directed, and "Big Momma’s House," 1, 2 & 3, where he once again proved his talent for creating and acting as multiple characters in one storyline.

Our latest Experience is here! Want to catch @zacbrownband in #Raleigh? Enter for your chance to win two tickets, VIP Parking & a $50 gift card! Enter using the link in our bio 😎
JUST ANNOUNCED: @LukeCombs is bringing his #WhatYouSeeIsWhatYouGet Tour to #Raleigh on September 19 with special guests @AshleyMcBryde @ @DrewParkerPlays! Tickets on sale February 28 at 10 AM.
Game on! 2/20/21
Welcome (back!) @martinlawrence. We look forward to another hilarious night with you, Michael Blackson, Lil Duval, Bruce Bruce and Benji Brown for the #LitAFTour in #Raleigh.
We are so excited to spend our evening with @CelineDion✨ #CourageWorldTour #Raleigh
JUST ANNOUNCED: #RageAgainstTheMachine will bring their tour to #Raleigh on August 2 with special guests @runthejewels! Tickets on sale this Thursday at 11 AM.
Tuesday night, @celinedion takes the stage in #Raleigh! 💕 Win tickets with our latest Experience! ✨ Hit the entry link in bio!
The adventure begins THIS Thursday night as @jurassicworldlivetour visits #Raleigh! Opening Night tickets start at just $15!
Tickets are on sale now for @rogerwaters This Is Not A Drill, a brand new audio-visual experience coming to #Raleigh on August 11! 🐖 🧱 🔺🔥
Our latest Experience is here! Enter for your chance to venture into the @jurassicworldlivetour with floor seats + VIP Parking 🦖 Check out the link in our bio to enter!
For the first time ever, @UFC Fight Night lands in #Raleigh! See you tonight! 👊🏼💢
JUST ANNOUNCED: @rogerwaters returns to North America with "This Is Not A Drill," Aug. 11 in #Raleigh. For the first time ever, In The Round. On sale Jan. 31 at 10AM!
JUST ANNOUNCED: Latin music superstar @ozuna brings us Nibiru World Tour to #Raleigh on May 24! Tickets on sale Friday at 10AM
JUST ANNOUNCED: @Cirque #AXEL, an all-new ice spectacle, comes to #Raleigh August 20-23. ⛸️ Tickets on sale NOW: bit.ly/CDS_Axel
Rolling out our next chance to "Experience PNC Arena!" Enter to win 2 tickets, VIP parking & a merch pack for #UFCRaleigh next Saturday night! 👊 Hit the link in our bio to enter!
Our friends from @jurassicworldlivetour were Siren Sounders to start tonight's @canes game! We can't wait to see Olive, the baby Stegosaurus, and all of the Jurassic World dinosaurs live at PNC Arena Feb. 6-9.
Kicking off a full weekend of @canes & @packmensbball action at home. A special shout out goes to our graphics team for designing our newest mural addition!
Our Event Staff is an intergral part of everything that we do! Join our part-time team and receive competitive pay, flexible scheduling, and more. Food & Beverage, Parking, Security and other departments are now hiring! Details & to apply: bit.ly/PTEmploy
Tickets are on sale NOW for @nickcannon Presents: MTV @mtvwildnout Live on March 11! See the #WildNOutCrew + musical guest @saweetie.
Friday night hockey? Yes please. Enter for a chance to win our latest Experience: 2 Tickets, VIP Parking + a Fan Tunnel experience for this Friday’s @canes game. Check out the link in our bio to enter! 🏒
Our latest Experience is here! Enter for a chance to join the NC State bench during warmups + join the fam runners to cheer on the Wolfpack as they take on Notre Dame. 🏀 Check out the link in our bio to enter!
Another great year is in the books! We are so excited for all that 2020 will bring. Cheers! ✨