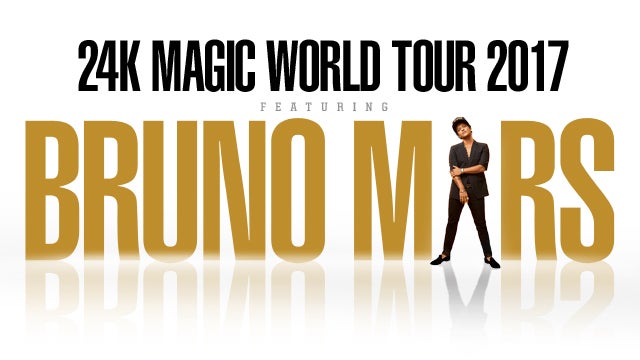 Grammy Award winner and world-renowned, multi-platinum selling singer/songwriter/producer/director/musician, Bruno Mars, revealed details behind his massive upcoming global headline tour - The 24K Magic World Tour (pronounced twenty-four karat magic world tour). The magic will begin March 28 at Antwerp, Belgium’s Sportpalais and will travel throughout Europe through June with shows set in London, Paris, Madrid, Zurich, Copenhagen, Berlin and more. The North American leg will follow kicking off July 15 at T-Mobile Arena in Las Vegas and then visit over 45 cities across the US and Canada before culminating with a four-night stand at The Forum in Los Angeles.

There is a 6 ticket per household limit. Tickets can be purchased online at ThePNCArena.com, the PNC Arena Box Office, all Ticketmaster outlets, or by phone at 1.800.745.3000.

We’re proud to be part of the #NCLive Coalition, along with many entertainment venues across North Carolina. Together, we’re working to bring live entertainment back to our state. NCLiveCoalition.com
Protect yourself this flu season! This Saturday from 9AM to 3PM, @harristeeter will host a Drive-Thru Flu Shot Clinic at PNC Arena. Harris Teeter pharmacists will adminster flu shots on site, with various safety precautions. Appointments are required and can be made online. Visit our website for details.
There is a critical need for blood donations in the Triangle and surrounding communities. You can help! Make an appointment for this Friday's drive with @thebloodconnection! Visit our website to sign up!
We've missed celebrating at home with thousands of incredible Canes fans, but, we're thrilled to cheer on this team from afar as they advance to the Stanley Cup Playoffs! #LetsGoCanes
The @lukecombs concert on Sept. 18 has rescheduled to Friday, Sept. 10, 2021 and the Sept. 19 concert has rescheduled to Saturday, Sept. 11, 2021. Tickets will be honored for the new date. Can’t make it? Request a refund. Ticketmaster will email ticket holders directly. Info: livenation.com/refund
Happy Fourth. Be kind to your fellow Americans and enjoy the holiday. 🎇
10/10 way to spend a Thursday.
Throwback to January 25 when @razorblaydes265 defeated @juniorcigano in the #UFCRaleigh main event! 👊 Catch Blaydes back in @ufc action tonight on @espn! 📸: Karl DeBlaker
The @dudeperfect event postponed from June 6, 2020 has been rescheduled to June 11, 2021. All tickets will be honored for the new date. See you next summer!
The Harry Styles concert originally scheduled for Aug. 1, 2020 has been rescheduled to Oct. 12, 2021. Worth the wait.
We stand together. #BlackOutTuesday
Visit @thebloodconnection Community Blood Drive this Thursday, 10AM-6PM outside of the box office. Limited appointments remain, but walk-ups are also accepted. All donations include COVID-19 antibody testing! ❤️
Great news! @michaelbuble's "An Evening With Michael Bublé" has been rescheduled to March 23, 2021. All tickets for the previously scheduled date will be honored. Such a great show to look forward to! ❤️
Everything we wanted. Thank you, @billieeilish 💚
Thank you for an amazing night, @zacbrownband!
JUST ANNOUNCED: Comedian @joerogan will bring his #SacredClownTour to #Raleigh on June 26! Tickets on sale this Friday at 10 AM.
🚨2ND DATE ADDED🚨 @LukeCombs is bringing his #WhatYouSeeIsWhatYouGet Tour In The Round with special guests @AshleyMcbryde & @DrewParkerPlays to #Raleigh Friday 9/18 & Saturday 9/19! Tickets on sale Friday 2/28 at Ticketmaster.com.
Our latest Experience is here! Want to catch @zacbrownband in #Raleigh? Enter for your chance to win two tickets, VIP Parking & a $50 gift card! Enter using the link in our bio 😎
JUST ANNOUNCED: @LukeCombs is bringing his #WhatYouSeeIsWhatYouGet Tour to #Raleigh on September 19 with special guests @AshleyMcBryde @ @DrewParkerPlays! Tickets on sale February 28 at 10 AM.
Game on! 2/20/21
Welcome (back!) @martinlawrence. We look forward to another hilarious night with you, Michael Blackson, Lil Duval, Bruce Bruce and Benji Brown for the #LitAFTour in #Raleigh.