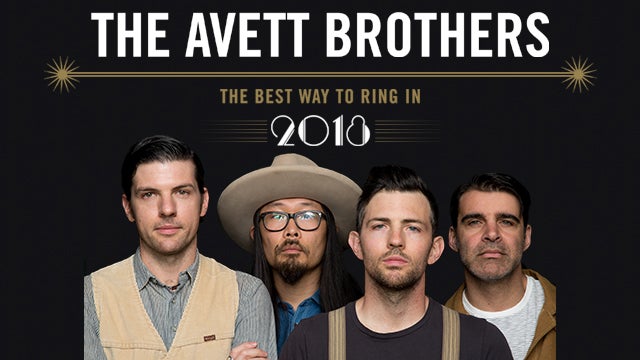 Continuing a longstanding tradition, The Avett Brothers will play their 2017 New Year’s Eve show in Raleigh, NC at PNC Arena on December 31, 2017. This will be the group’s 14th annual NYE performance and second NYE event in Raleigh.

Banjoist Scott Avett and guitarist Seth Avett of Concord, NC, formed The Avett Brothers in 2000, along with standup bass player Bob Crawford. Cellist Joe Kwon joined the band in 2007.The 2017 Grammy Award® nominated alternative folk luminaries are on the road in support of their #1 album and ninth release, “True Sadness,” which features the blockbuster single and chart-topper “Ain’t No Man.”

The @lukecombs concert on Sept. 18 has rescheduled to Friday, Sept. 10, 2021 and the Sept. 19 concert has rescheduled to Saturday, Sept. 11, 2021. Tickets will be honored for the new date. Can’t make it? Request a refund. Ticketmaster will email ticket holders directly. Info: livenation.com/refund
Happy Fourth. Be kind to your fellow Americans and enjoy the holiday. 🎇
10/10 way to spend a Thursday.
Throwback to January 25 when @razorblaydes265 defeated @juniorcigano in the #UFCRaleigh main event! 👊 Catch Blaydes back in @ufc action tonight on @espn! 📸: Karl DeBlaker
The @dudeperfect event postponed from June 6, 2020 has been rescheduled to June 11, 2021. All tickets will be honored for the new date. See you next summer!
The Harry Styles concert originally scheduled for Aug. 1, 2020 has been rescheduled to Oct. 12, 2021. Worth the wait.
We stand together. #BlackOutTuesday
Visit @thebloodconnection Community Blood Drive this Thursday, 10AM-6PM outside of the box office. Limited appointments remain, but walk-ups are also accepted. All donations include COVID-19 antibody testing! ❤️
Great news! @michaelbuble's "An Evening With Michael Bublé" has been rescheduled to March 23, 2021. All tickets for the previously scheduled date will be honored. Such a great show to look forward to! ❤️
Everything we wanted. Thank you, @billieeilish 💚
Thank you for an amazing night, @zacbrownband!
JUST ANNOUNCED: Comedian @joerogan will bring his #SacredClownTour to #Raleigh on June 26! Tickets on sale this Friday at 10 AM.
🚨2ND DATE ADDED🚨 @LukeCombs is bringing his #WhatYouSeeIsWhatYouGet Tour In The Round with special guests @AshleyMcbryde & @DrewParkerPlays to #Raleigh Friday 9/18 & Saturday 9/19! Tickets on sale Friday 2/28 at Ticketmaster.com.
Our latest Experience is here! Want to catch @zacbrownband in #Raleigh? Enter for your chance to win two tickets, VIP Parking & a $50 gift card! Enter using the link in our bio 😎
JUST ANNOUNCED: @LukeCombs is bringing his #WhatYouSeeIsWhatYouGet Tour to #Raleigh on September 19 with special guests @AshleyMcBryde @ @DrewParkerPlays! Tickets on sale February 28 at 10 AM.
Game on! 2/20/21
Welcome (back!) @martinlawrence. We look forward to another hilarious night with you, Michael Blackson, Lil Duval, Bruce Bruce and Benji Brown for the #LitAFTour in #Raleigh.
We are so excited to spend our evening with @CelineDion✨ #CourageWorldTour #Raleigh
JUST ANNOUNCED: #RageAgainstTheMachine will bring their tour to #Raleigh on August 2 with special guests @runthejewels! Tickets on sale this Thursday at 11 AM.
Tuesday night, @celinedion takes the stage in #Raleigh! 💕 Win tickets with our latest Experience! ✨ Hit the entry link in bio!
The adventure begins THIS Thursday night as @jurassicworldlivetour visits #Raleigh! Opening Night tickets start at just $15!